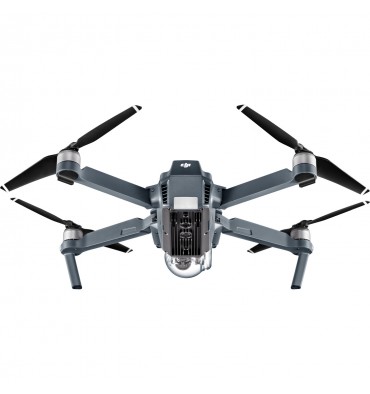 Add to my wishlist: » Create wishlist first Product was successfully added to your wishlist.

The DJI Mavic Pro is a small yet powerful drone that turns the sky into your creative canvas easily and without worry, helping you make every moment an aerial moment. Its compact size hides a high degree of complexity that makes it one of DJI’s most sophisticated flying cameras ever.

24 high-performance computing cores, an all-new transmission system with a 4.3mi (7km) *range, 5 vision sensors, and a 4K camera stabilized by a 3-axis mechanical gimbal, are at your command with just a push of your thumb or a tap of your finger. *Unobstructed, free of interference, when FCC compliant.

The Mavic uses DJI’s newly developed OcuSync transmission system. Part of the Lightbridge family, OcuSync performs far better than Wi-Fi transmission at all transmission speeds. OcuSync also uses more effective digital compression and channel transmission technologies, allowing it to transmit HD video reliably even in environments with strong radio interference. Compared to traditional analog transmission, OcuSync can transmit video at 720p and 1080p – equivalent to a 4-10 times better quality, without a color cast, static interference, flickering or other problems associated with analog transmission. Even when using the same amount of radio transmission power, OcuSync transmits further than analog at 4.1mi (7km)*.OcuSync goes even further than optimizing the communication mechanism and parameters of aerial imaging. There are several video transmission systems on the market claiming to offer video transmission with zero latency. However, it should be noted that the physical layer of those transmission systems is too simple to adapt to changes in the environment. When affected by signal interference, the image quality of the video being transmitted will fall sharply. This means these systems are not suitable for far field transmissions and transmissions in interference-heavy environments. Also, because these video transmission systems are not integrated into the whole system, latency will immediately start to rise up from 0 when working with devices including cameras and displays. OcuSync is able to strike a perfect balance between latency and receptivity, reducing latency to 5ms for remote controller transmission commands, 10ms for video data and 130ms for videos. More than low enough to ensure that Mavic is able to fly reliably despite interference. OcuSync’s integration with video processing, coding, and signal transmission systems also make it more cost effective. Before taking off, OcuSync will automatically scan the environment and choose the frequency band with the lowest interference, ensuring more stable video transmission. During a flight, it sends key flight parameters back for viewing in the DJI GO app and supports a maximum download speed of 40Mb/s for photos and videos.There are many Wi-Fi based transmission systems available on market. However, the experience of using OcuSync is completely different. As Wi-Fi was primarily designed to connect electronic devices locally, it works best when connecting to nearby devices. As it was designed for short range, Wi-Fi systems use low cost transmitters that suffer from weak data links. This means that a Wi-Fi cannot detect weak signals or signals with interference. OcuSync however, uses many cutting-edge communication industry technologies to outperform Wi-Fi in terms of sensitivity, anti-interference, and anti-fading, as well as when flying at high speed. It also supports simultaneous connection to multiple devices. In use, this is the difference between smooth or interrupted transmission, short or long flight range, and short or long recovery times after interference or GPS signal loss. Additionally, since Wi-Fi uses a traditional protocol stack, it takes longer - from several seconds to tens of seconds – to get connected and to re-connect after signal loss But OcuSync uses Cross-Layer Protocol Design, it can establish or re-establish links within one second. As well as point-to-point video transmission, OcuSync also supports wireless connections to multiple devices. For example, you can connect the DJI Goggles, remote controller, and Mavic wirelessly to OcuSync all at the same time. You can also add an additional remote so that you can control the Mavic with two remotes or share First Person View (FPV) videos. * Unobstructed, free of interference, when FCC compliant.

NO BUMPS AND SCRAPES

Ultrasonic waves and Time of Flight (ToF) sensors are often used to measure distance from an obstacle, but both methods calculate distance based on signal reflection and are therefore reliant on the shape of the obstacle. This means distances from common obstacles such as rocks and branches cannot be sensed. FlightAutonomy gives the Mavic long range, high precision obstacle sensing, enabling it to scan its environment in 3D before taking off. FlightAutonomy ensures the Mavic precisely locates obstacles around it.Detecting obstacles requires getting information about the obstacle to the Mavic. Ultrasonic and ToF sensors measure distance by detecting the first reflected wave. In other words, they can only measure the distance from a single point, instead of getting a 3D depth image of a particular obstacle. Another method of creating a depth image is structured light projection. For this, a structured light sensor projects infrared in a specific shape onto the obstacle in front of it. The infrared then reflects back and the sensor then calculates the strength of the reflected signal so that it can create a 3D depth image of the obstacle. However, due to the limited strength of infrared and interference from visible light, the maximum sensing distance for a structured light sensor is only 3 to 5 meters. It is also ineffective in bright light significantly reducing its reliability and effectiveness on a sunny day.FlightAutonomy is made up of 7 components including 5 cameras (forward and downward dual vision sensors and the main camera), dual-band satellite positioning (GPS and GLONASS), 2 ultrasonic rangefinders, redundant sensors, and a group of 24 powerful, specialized computing cores. Cameras on the left and right side in the front of the Mavic are fixed in place using an aluminum bracket to ensure the optimum alignment of the vision sensor lenses. As the Mavic flies, dual forward and downward vision sensors measure the distance between itself and obstacles by taking photos from all four cameras and using the information to create a 3D map that tells it exactly where obstacles are. The dual forward and downward vision sensors require visible light to function, and in bright light can see as far as 49ft (15m) out in front.This obstacle avoidance system is activated in every Intelligent Flight Mode including all ActiveTrack modes, TapFly and Terrain Follow. It is also available during automatic Return to Home, so that the Mavic can easily make its way back without bumping into anything in its path.

Situations without satellite positioning can be divided into two main types. First, satellite connectivity may be unavailable when flying indoors. Second, satellite connectivity is cut off during an outdoor flight, such as by flying under a balcony or flying from indoors to outdoors. The loss of satellite positioning makes these scenarios dangerous for new pilots, or those who want to fly long distances*.If the drone wants to position itself using satellites, the flight controller needs the current location and flight speed of the aircraft. However, if the drone needs to position accurately without GPS, flight status and location will need to be collected another way. Vision positioning equipped drones generally use what is known as an Optical Flow visual positioning system, consisting of dual ultrasonic sensors and a single camera. The ultrasonic sensors provide altitude information by measuring the distance between the aircraft and the landing point, while the single camera is used to calculate positioning information by capturing images below the aircraft. As ultrasonic sensors are the only measure of height, the higher the aircraft flies the less precise the data from reflected sound waves become. Accurate height positioning is therefore limited to less than 3 meters. The single camera is unable to improve height positioning accuracy and limits areas that the drone can hover stably to those that have a clear and definable texture. The Mavic overcomes these problems through the use of dual forward vision sensors. This setup allows the Mavic to see obstacles in 3-dimensions up to 15 meters in front, increasing positioning accuracy to 2-3 times that of an Optical Flow system. It also allows the speed of the aircraft to be calculated, enabling precise hovering at up to 10 meters without satellite positioning. Dual forward vision sensors allow it to calculate its current location and speed of flight by observing the scene in front, further increasing positioning accuracy. Thanks to this precise hovering technology, the Mavic is able to automatically land almost exactly where you took off. Every time you take off, the two downward facing vision sensors record a burst of video of the ground below and pair it with satellite coordinates. When you tell the Mavic to fly home, it will return to that coordinate, match the video, and land back at your feet.*Line of sight flight is required in some countries.

20 other products in the same category:

Product was successfully added to your shopping cart.

huston we have a problem